Solomon Islands and PNG Experience - Land of the unexpected
off

Solomon Islands and PNG Experience – Land of the unexpected

Though the Lord is exalted, he looks kindly on the lowly; though lofty, he sees them from afar. Though I walk in the midst of trouble, you preserve my life. You stretch out your hand against the anger of my foes; with your right hand, you save me. Psalm 138:6-7

It’s a great pleasure for us to be able to share with our brethren and friends our missionary trip experiences in the last two months of March and early April 2017 to the Solomon Islands and Papua New Guinea.

From our last visit to the Solomon Islands towards the last quarter of 2016 we were pleased to see the faithfulness of Bro Joseph Tome who was our first church member in this country. Bro. Tome, through God’s grace and guidance and his continual personal efforts managed even for such a short period to successfully extend the message across to other people across the islands. It is a good and encouraging sign for the future progress of the Lord’s work in Solomon Islands.

A meeting was organized at the end of March where Pr. Anton Salavyov together with my assistance wanted to find out how the missionary work could be extended. We fellowshipped together with at least 10 other interested young souls who attended the weekend meeting which started on Friday and ran until Sunday. Though the time was short for a full course of studies we felt the blessing of the Holy Spirit. We acknowledged that these 10 interested souls were impressed by the spiritual information and participated earnestly, asking questions in the PowerPoint presentation studies. By the end of our meeting they had made a commitment to follow the Lord and be baptized in the very near future as well. We also had the pleasure of having pleasant spiritual conversations with our friends during our resting time also.

On Sunday morning God blessed us with the baptism of Bro Joseph’s wife. She had made the decision to become a part of the God’s church and true follower of Christ through her baptism covenant. It was time to choose where to hold the baptism. In the ocean or in a river? Rivers in the Solomon Islands are home to crocodiles and bombs from the Second World War, while in ocean sharks swim freely. Finally, trusting God, we had a happy and blessed baptism in the ocean. The Holy Supper service was conducted in Br. Joseph Tome house.

I also want to acknowledge Br. Tome’s willingness to improve the Lord’s work in Solomon Island by building a church in his property land as well.

After Pr. Anton returned to Sydney to follow his other spiritual commitments I continued with my Missionary journey to Alotau, Papua New Guinea. 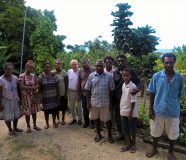 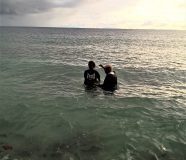 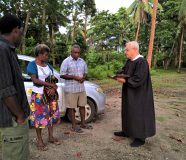 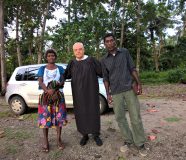 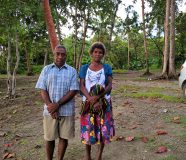 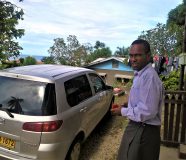 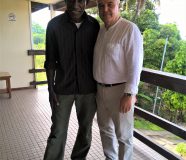 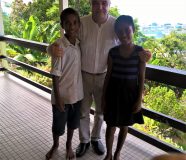 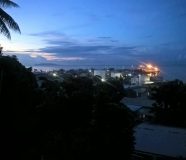 The trip to Alotau was anticipated to be an exciting one since a completely new region is now to be reached. With Bro Alipi Sakiusa, leader of the Alotau group already organizing the baptism of seven new souls from Ferguson Island we were feeling the delight of the extension of the work to this new field. I reached Alotau on Tuesday morning and preparation was immediately done for our travel from Alotau town to the southernmost tip known as East Cape to board a boat for a three-hour trip to the island. Early Wednesday morning we left Hagita, Alipi’s place for Alotau and after sorting our other things we left at about 2pm for another 2-hour truck ride to the cape. Our brethren from the island were also excited and preparations were being done for our arrival. At about 5 o’clock after loading our luggage on the 24-ft. fiberglass boat we hopped on, and were on our way to the sea. It was a bit windy with dark clouds, I felt a little bit reluctant of travelling out to sea but knew that the Lord would be our protection. About more than an hour into the high seas, the unexpected occurred, another boat of similar make up pulled up suddenly out of nowhere to the back of our boat and as we turned our eyes to see, we could see a machine gun, guns, knives and masked man shouting wildly for us to stop and go overboard leaving everything behind. I saw our members five of them with a four year old, jumping overboard into the blue and dark waters. These all seemed like a dream to me as I could not think about the reality of what was happening. We are now in the middle of the blue ocean, defenseless and we had to jump into the water with guns pointed at our heads, not knowing what would happen in the next moment. We swam away from the boat trying at all cost not to provoke the sea pirates. Our minds were in confusion and of course we sought God for help, but in the face of reality death was to be expected at any moment now. Amazingly, the pirates left off in less than 10 minutes leaving our totally stripped vessel, and interestingly throwing back my emptied computer bag, with the old broken phone of Alipi which had already been soaked in sea water when he jumped with it into the ocean. As the pirates left we gathered ourselves together back into the boat, now with no engine. All were shaken and wet, this was the opportunity that God allowed for me as a worker to gather us together and offer our prayers of thanksgiving to the Lord. Brother as and sisters, it was solely through God’s merciful providence that our lives have been spared. Nothing could have saved us from that situation except the hand of God, and I’d like to uphold the words of prophet Job once again when he stated emphatically after all his painful experience: ‘I have only heard about you, but NOW I SEE YOU!’ Brethren I count it a blessing for me and the Alotau brethren to have undergone this experience, at that moment while losing everything we had, our baggage, passport, books, laptops etc… we eventually saw God. Brother took hold of his phone and tested it, to his amazement it was still working. This old and broken down phone had all contacts and enabled us to sought for all the help that we needed. Again. It is another of God’s amazing miracle, the soaked-up phone still worked.

I now take this opportunity on behalf of the Alotau brethren as well as my family and the Fiji Field to extend our tremendous thankfulness to God for his protection and merciful providence. I also extend our acknowledgement to the Union President Bro Anton Salavyov for continued connection and communication, Union Secretary Bro Robert Bowman for the tireless efforts in coordinating the work of our evacuation, and the members and friends of the Oceania region as well as the world at large who have shared concern and prayers for our protection. Please allow me to acknowledge The Ministry of Foreign Affairs of the Fiji Government, The Fiji High Commission Office in Port Moresby Mr. Vilitati Mataitini & Mr. Vilikesa Naivalucava, the Fijian Community in Port Moresby, and the various church leaders who have made their commitment through spiritual intervention. I believe that from our confined initial anticipated trip to Ferguson Island, the impact of this incident has covered a large spectrum of people world widely who have shown and are still showing the power of true Christianity concern in their lives. I believe that God has a large sheep fold and is now calling for His sheep and His voice now rings louder. Plans are now underway for the next trip to Alotau in few months time with Ferguson and Russell islanders to be baptized in Alotau. Let us pray that God sends forth more reapers as the Fields are now ready for the harvest. God bless you all.

For PNG and Fiji