Please download this PDF file which includes a printable version of the story as well as a CROSSWORD and a COLORING PAGE.

Do you like the rain? What do you like to do on rainy days? Maybe splashing about in puddles or perhaps just watching the rain fall from the warmth of your home. Well, would you believe that thousands of years ago people had never seen raindrops fall from the sky?!†

Noah lived thousands of years ago. No one knows exactly where he lived but some think it may have been somewhere in the Fertile Crescent.‡ He was a faithful man, who loved God and listened to His instructions to build a special boat.

Noah lived with his wife and their three grown-up sons. His daughters-in-law lived with them as well. Noah and his family worshipped the true God, the creator of all things in the heavens and in the earth and under the earth, but the majority of the people in Noah’s community worshipped idols and had wickedness in their hearts. God loved everybody very much and desired that all the people should live justly and love one another, treating each other with respect. However, most of the people would always put themselves first and not be considerate to others around them.

God told Noah that He felt sorry that He created the Earth and was disappointed in the people and their continuous wicked thoughts and deeds. 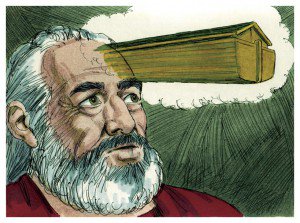 The Lord said to Noah that He would destroy all living things on the earth. Noah was a righteous man and found grace in the eyes of The Lord, so He would spare Noah and his family. God asked Noah to build an Ark. Noah’s great-grandfather, Enoch had been given a vision about the coming worldwide flood and had warned people about it for many years. The people ignored his warnings as they had never seen anything like a flood or even rain! The earth had always been watered with a dew or mist, not with rain.

Noah listened carefully to God’s instructions and collected all the materials he needed for the Ark. He spent his days crafting the Ark from Gopherwood and preaching to the people about the coming flood.

Noah knew that the day of the great flood was nearing. He made his last solemn appeal to the people, asking them to take shelter in the Ark. He didn’t want anybody to perish! With an agony of desire he pleaded with them to seek refuge while it might be found. Noah knew that once the door to the Ark was shut there would be no more hope for the people outside of it. 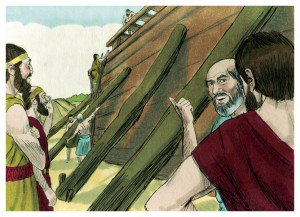 While Noah was begging his neighbours, friends and strangers to come aboard a noise of rushing wind was heard. Everybody looked around to find the source of the sound. Can you guess what was making all that noise? Birds were flocking in from all directions beating the air with the wings. There were so many of them that they darkened the sky. In perfect order they boarded the Ark, two by two and seven by seven. Next all kinds of animals, male and female marched onto the Ark in perfect order. The people were amazed at the sight but even still, they did not want to enter the safety of the Ark.

Finally, Noah and his family boarded the Ark. There was only one door on the boat and it was impossible for anybody within the Ark to close it. A flash of dazzling light and a cloud of glory hovered at the entrance of the Ark and the door slowly swung closed by unseen hands. It was God who closed the door and God alone could open it.

Noah and his family were safe inside the Ark with the animals and the birds. They could hear mocking voices outside. The sun was shining and there was no sign of any storm.

The people outside of the Ark continued to mock Noah and his family. For seven long days there was no sign of a flood and their faith was tested.

On the eighth day, dark clouds covered the sky, thunder rumbled and lightning flashed! Then large drops of rain began to fall from the sky. The people had never witnessed anything like this before! They were gripped with fear and shocked that Noah had been right all along. They never thought his warnings would actually be true!

The clouds grew darker and the rain started to fall faster and heavier. Trees were falling and buildings were crumbling. The people and animals were fleeing in all directions. The rain continued to fall for forty days and forty nights.

The waters rose and the Ark floated along for five months. Forty days after the tops of mountains became visible, 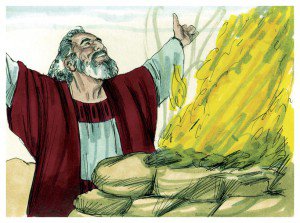 Once the door to the Ark was opened, Noah stepped onto the dry earth and built an altar. There he made a sacrifice to The Lord; thanking Him for His protection and mercy upon his family, himself and the creatures on the ark.

Noah cleared the Ark of the animals and the birds and they travelled together in their pairs and groups. God told Noah that He would never destroy the Earth with a flood again. God makes something to remind us of His promise to Noah. Do you know what it is? It’s a rainbow! Each time we see a beautiful rainbow in the sky we are reminded of God’s promise. 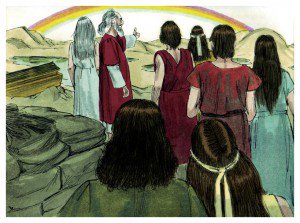 Let us be faithful to God’s instructions like Noah was. Even when people mock us, let us hold on to God’s Word and His promises!

† – Patriarchs and Prophets pp 96
‡ – The Fertile Crescent is a crescent-shaped area in the Middle East. It starts from the Nile Delta in Egypt and stretches out into Phoenicia, up into Mesopotamia (where the Euphrates and Tigris rivers are) and into parts of Media, stretching down to the Persian Gulf