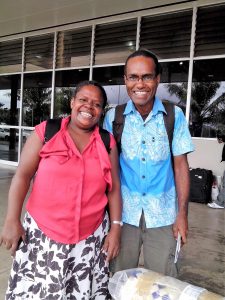 I arrived in Honiara, on Tuesday 09th of February to spend the last week of this missionary tour. Awaiting me was Sis Delmay with her son, Ismael and her husband, Bro Michael. It was indeed a joyful occasion as we have not seen each other for the last ten years. In fact, my relationship with this local couple went back to the year 2005 while undertaking their course of study in Fiji. Bro Michael reminded me of the when they were living in Fiji they were robbed of the money they had and were praying to God for help. We met them through their connection with my sister. We not only brought them groceries as answers to their prayer but brought them to our home to live with us for the remainder of their study term in Fiji. For the last ten years after they returned to their country, we have continued to stay in touch, until now when the need has arisen for the work to begin in the Solomon Islands. The Lord is to be praised for this wonderful providence.

I noted that the Adventist membership assumed the third largest of the Christian denominations here. The Prime Minister, several government ministers and opposition members are Adventist, so I was quite satisfied with the idea that this would facilitate my role here. With that in mind I planned to attend the PM’s church with the hope that I might have the opportunity to get in touch with him. On Friday I got in touch with Bro Don Williams of Vanuatu who also gave me the few contacts he had in Honiara. I attempted to reach these Adventist members on Friday. Unfortunately, two were in Fiji, and two others had gone out when I arrived. I took some time to wait for them and finally called one who was a supervisor by phone. She was quite co-operative and said she would be willing to meet up with me on Sabbath at her church. She called me again confirming our meeting. So I had to change my plan of attending the PM’s church and went to a church just outside of Honiara to be able to meet this lady. I arrived at the church on Sabbath morning the woman had not come in yet so I remained during the meetings till the end hoping to meet with her, as I was twice welcomed publicly from the speakers I knew that she should have by now heard of my presence. However, I could not find her even whilst waiting outside after the meeting. So I decided to return home. A sense of weariness came over me as I felt my efforts were in vain. I spent the afternoon praying that the Lord would open the way for me.

Late in the evening, Brother Michael told me of another couple interested to come and invite me to their home on Sunday. Again I was glad that this might be another opportunity for the Lord to open a way for someone to receive the message here. I prayed about it and asked the Lord to do according to His will. However, from morning till night it was raining and so wet that even network connection was affected and we were confined indoors for the whole day. I continued my conversation with Bro Michael in the hope that somehow God would show his plan for my stay in the Solomon Islands. I continued to seek the Lord for answers.

Early Monday morning I knew that this was my last day in Honiara and the Lord needs to keep His part of the promise. He did not send me here to fail!

I left early for the airline office to confirm my travel, after which I thought I should take one last walk around the capital. I began from one end of town reaching the other end and even visiting the graves of World War II Fijian soldiers. As I was returning I thought of getting some fruit from the local market, so I crossed over and entered the market gate. However, as I walked through my mind seemed to be carried away while looking out towards the sea, so I entered out to the other end reaching to the sea side. Then after a few minutes I thought of returning but as I walked past the market gate, again I thought of buying some fruit. So again I went in but just as I entered I noticed an elderly man whom I had seen in church on Sabbath and at that instant I felt that I had to speak to him. However I stood from the side watching him from a distance as he walked passed me, but then he stopped and looked back just where I was standing and just as his eyes caught mine I gave a smile and he called me. As I came near him he asked me to carry his plastic bag of root crops to the road. This was the opportunity I was waiting for and the Lord opened the way for our conversation to begin. It was not long and just at the road side beside the market he openly offered a prayer for us. He has accepted the message! May our Lord be honoured for His ways are not our ways!

The next morning, I went early in the morning to have a talk with the man. He was with his son when I arrived. As soon as he finished his morning devotion he gave me time to explain what I have. I began explaining to him biblical prophecies on reformation. Though the man had some reservations, his son was interested in the message. Time was quickly running out for me in the Solomon Islands. However, the man and especially his son promised to await our next trip whilst going through the literature I had placed with them. There was another young couple related to Bro Michael who were also interested but bad weather had prevented my trip to their village on Sunday. They have given me their contact details and are looking forward to our next missionary trip where we hope to hold meetings in their villages thus establishing the work in the Solomon Islands. I left the Solomon Islands that afternoon with the best wishes of the interested brethren who are now looking forward to our next trip.

My experiences during this trip have sparked an urgency in me to reach more and more into the most remote regions of these areas to spread the gospel. May the Lord’s will be done always and may we remember our Melanesians brothers and sisters in our prayers. God bless you all is my wish and prayer.