Here are some stories of gratitude from our latest Indonesian Baptism ceremonies. 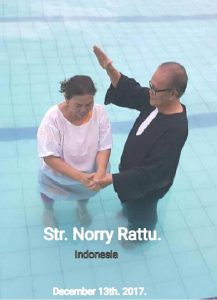 1. Sister Norry Rattu, was our member formerly. While she was a member she had been active in the church services and works, supporting her husband who is a Bible Worker, not only in Jakarta, but also in Medan. Yet afterward, she then resiged from the church.  She still attended our church activities from time to time. The years before, she was ever wandering, and sometimes was going to the Mission Adventist church (SDA). But this sister was not interested in SDA doctrines or the doctrines of  other churches and also desiring to be united and back again with her husband’s church. Thus, by God’s help of His Holy Spirit she finally decided to come back to IMS. She was baptised in the Jakarta Local Church, on December 13th, 2017. 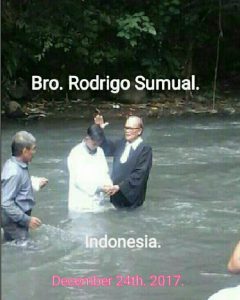 2. Brother Rodgrigo Sumual – This young brother is a son of our brother and sister in the church. He has following his parents in attending our church activities and worship. About a year ago he received the doctrines of Reformation, but the parents forbade him to be baptised too soon, because they saw that he was still too young. He kept on attending the church meetings and participate in the church activities with the youth. Later on, by the helping of His Holy Spirit, because he kept asking to be baptised, also by consultation and sharing with some church members, the parents finally gave him permission to have his baptism. He was baptised in Amurang Local Church on December 24th, 2017 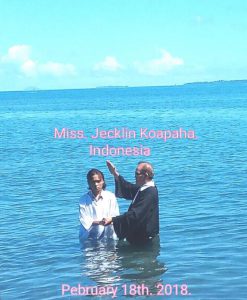 3. Sister Jecklin Koapaha – She was a member of the Jehovah’s witnesses. But His Holy Spirit has blessed her with our church doctrine. About a year before her baptism, she received the IMS doctrines from her school teacher which is our member. Then, after hearing about the Reformation doctrines, she made some more personal investigations to find out more about this Reformation movement. Finally she believes that this is the right church and received the truth, and asked for baptism. She was baptised in Bengkol Local Church, on February 18th, 2018. 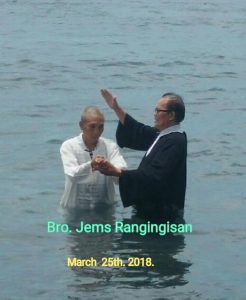 4. Brother Jems Rangingisan. This brother was a member in SDA, he then became inactive, because a family problem. One day, he visited his uncle, who is our church member. About three weeks afterward he was given bible studies about the Reformation by his uncle. This brother diligently studied it. Praise our dear Lord, he finally confessed again that the Reformation church is surely the church of the truth. By his own efforts he also struggled to attend the worship services every Sabbath. Some months later, this brother was asking for baptism. Thus, he was baptised at Manado Local Church, on March 25th, 2018.

Praise the Lord and thank you very much, for your continuous kind support, help, and prayers for us in Indonesia.